There is a new series on Netflix , Ryan Murphy’s latest show called Hollywood  inspired by true life events of the Golden Era, has become the talk of the town among its Netflix viewers.

The group attempt to hit the big time by making a movie about Peg Entwistle, a heartbreaking tale of a young actress who took her own life. But while plot points from the show are largely fictional, the story of Millicent Lillian “Peg” Entwistle is very much factual.

Entwistle was a British actress who died by suicide in 1932, and subsequently became known as “the Hollywood sign girl” in tabloids, after throwing herself off the iconic site’s “H” letter.

Murphy’s Hollywood is a Pollyanna, revisionist version of what he wished had gone on, if only a few compassionate and empathetic souls had taken a stand and made the correct choice instead of the easy one, and bolstered each other up along the way.

What is completely ridiculous is Murphy’s declaration that screen representation matters. Of course it matters, but the idea that all that needed to happen for the past 70 years of racial, sexual, gender and political struggles to have not been necessary was one movie defying anti-miscegenation laws and anti-homosexuality laws to have been a hit in 1947 is ludicrous.

To that end, Hollywood is really let down by its plot armour. There are twists, story choices and character turnarounds that are not earnt, all in the service of this idealised 2020 version. 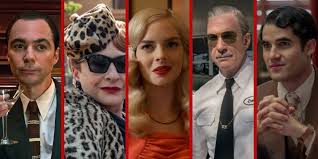